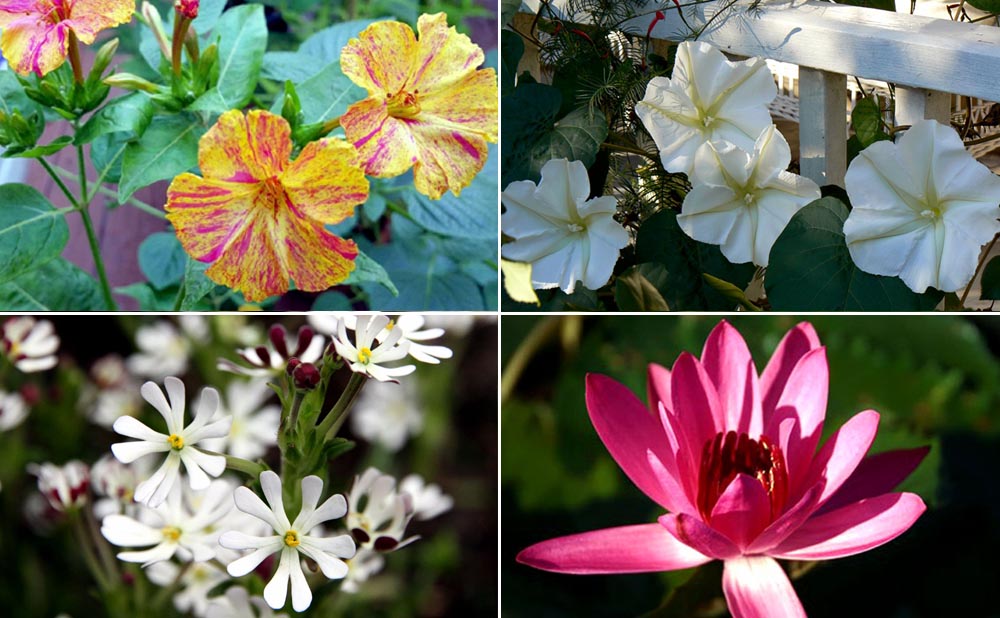 Moonlit nights, and the flowers around you, and the fragrance that smells, It will be peaceful to spend your time in such a garden, especially at the time when you are in search of quiet after your busy time. If you want to give your garden something like this, Nature Bring has listed night blooming flowers. These are tender perennial flowers blooming at night. Its flowers are of a trumpet shape, which is blossoming in spring and summer; they come in many colors like Red, Yellow, White, Pink, and Blue. Fragrant, cheerful Mirabilis jalapa has many nicknames, but its most popular name is four o ‘clocks. It is native to the tropical regions of South America. They require care because they become annoyed in ideal situations. In cold weather, their seeds have to be regulated with re-seeding. The previous part of its leaves, which is connected to the stem, are oval and sharp in front and multi branches. Evening primrose flowers are a habit to blossom in the night. Like this 4 o’clock flowers, they bloom in the evening. According to its species, this plant is known by many names such as coffee plants, golden candlesticks, and many other nicknames. This plant can be annual, biennial and perennial. Evening primrose (Oenotherabiennis) is native to North America, but now it is also found in Europe, Asia, New Zealand, and Australia. Its flowers are beautiful yellow, which blooms in the night. It is also known as a medicinal plant, its seeds oil and root are used as medicines. This plant grows in length from 3 to 5 feet. Read more. Jasmine Night Blooming (Cestrum nocturnum) is a woody evergreen shrub, which is native to Southern Asia and the West Indies. Jasmine Night Blooming is small tubular green-white flowers blooming in the warmer season. It grows mostly in moist and sandy soil and can go up to a height of 6 to 13 feet.
In the night, this golden flower spreads strong fragrance, but there are toxic elements in the night flowers and berries. Its leaves are shiny It grows very well in America’s firmness area 8-11. Most people use it to enjoy the odor in their garden. Moon Flowers are perennials in sub-tropical areas, which are aromatic flowers blooming in the night, the United States grows well. In cold areas, the gardener can develop it successfully as the annual. As it is named, it blossoms in the night and closes in the morning. At night, its white-pink flowers make a moonlight feel. Sandy and loamy soil are the most suitable for the Moon Flower seeds. Its plant height ranges from 6 to 15 feet. Its leaves are larger in size of the heart. Read more. It is the tropical night blossoming flower, which can be seen in any pond. Night bloom water lilies are dark red, pink or violet in colors. These flowers are open in the evening and there is a secret in the morning. Wonderful collections for the water garden can be. Its flowers are 7 to 10 inches tall, each flower has 19 -20 petals, and pungent smell. These flowers form a wonderful landscape, floating in the water. Night bloomers do not tolerate cold water, when the water is too cold it does not flower. See the post related to water features. Blade Lily is its nickname, but it is known in different countries by the name of gladiolus, gladiolas, gladioluses and plural gladioli. Its mostly species are extensively transmitted in Tropical Africa, South Africa, Asia, Mediterranean, and Europe. Beautiful night blooming flowers Gladiolus (Gladiolus Tristis) is cream color beautiful flowers which have spices smell. It is usually grown in heavy rainfall areas. The height of its plants is around 3 to 4 feet. Its flowers come at the beginning of the spring and the early summer period. Some parts of its plants are poisonous and may allergen. This plant attracts butterflies and honey bees. See. The name of this beautiful flower is known as Hindu God Brahma. Its petals are the supernatural resemblance of lotus flowers. People treated it as a holy flower. After flowering, the sun starts blossoming and in the middle of the night, it appears with its full beauty. The flowers in Brahma Lotus bloom only once a year at night. It is found in inaccessible mountains and cold spots. It is also known as an orchid cactus. It is also known as 12 o Clock at Night sweet. This night blooming flowers is completely closed during the day and it blossoms in the night. The flowers of this pink and white color scatter their beauty during the night. It has a different kind of aroma which is usually like vanilla, almond, and honey. Because of which it is also known as Midnight Sweets. The annual evening phlox has an altitude of 1 to 1.5 feet. This flower spreads its beauty in the summer. It is known as Angel Trumpets due to the flowering of its hanging trumpet. These hanging flowers combine exotic beauty in the garden. Due to the beauty and tenderness of its flowers,  Its extreme toxicity turns down. It is so toxic that sometimes it becomes a cause of serious illness or death. According to the US Department of Agriculture, Angel  Trumpets are flourished very well in Hardiness zones between 9-11. You should be planted in a place where children and pets cannot reach. Read more.

One thought on “Night Blooming Flowers | Elegant flowers in night”